As an artists, I’ve struggled with inspiration and where to find it for many years.

When I designed, the idea was there and often it seemed planted in my brain. There was just an overwhelming urge to make that thing. So, I followed my instincts.

I thought that’s how great art was made. It might be. For me, however, eventually that path led to an empty well. The ideas would eventually dry up, I would be left feeling uninspired and empty. Then a few months would go by and often I would produce art, but not to the best of my ability.

As I’ve continued to work as an artist, one thing has become increasingly true. Inspiration is less divination and more motivation.

What I mean by that is that inspiration is that is often found. It rarely just plants itself next to us on the couch and demands to be recognized. If your inspiration is gathered in such a way, you may experience the highs and lows that I’ve experienced throughout my career.

The fix, as it were, is simple. You have to get out and move to cultivate ideas and keep a log of inspiration. Whether that’s out of your studio, your home, or even just getting out of your own mind. You have to create a disconnect to the environment that you are surrounded by on a daily basis and see all that the world has to offer.

My inspiration, primarily, comes from nature. I live in Raleigh, North Carolina and am surrounded by some of the greatest and most prolific natural scenery that I’ve ever experienced. The trees reach higher than I’ve ever seen and the air constantly smells of sweet honeysuckle, magnolia, or dogwood.

The Azaleas bloom for two weeks and throughout those two weeks that my mind floods with ideas. The simplicity and rigidity of nature is astounding and makes its way into every facet of my art.

I rarely would see this magnificence if I sequestered myself in my studio. I force myself to get out and walk three times a week. Sometimes this is a true struggle. As artists, I think, we often want to stay connected to our work and fear that any disconnect could irreparably damage the vision that we have.

Once or twice a month I even take a trip. On a Friday or Saturday I make my way to the Rose Garden, NCSU Campus, Duke Gardens, or the Arboretum. I make sure to bring an empty SD card and a fully charged camera. Then I let my lens to the walking for me.

It is in these moments that I can truly see what I am inspired by. My urge to reconnect with nature is my driving force. The urge to break the bond that so many American’s have with modernism and to reexamine the relationship between those things that bring us life (nature) and those that take life (humans).

I then take those photos and keep them close. I print them and place them in a folder specifically designated for inspiration. I carry that with me wherever I go. It contains verses from Robert Frost, photos of plants, recipes I want to try, stitches I fall in love with, sketches that just need to be made, and even random scribblings. 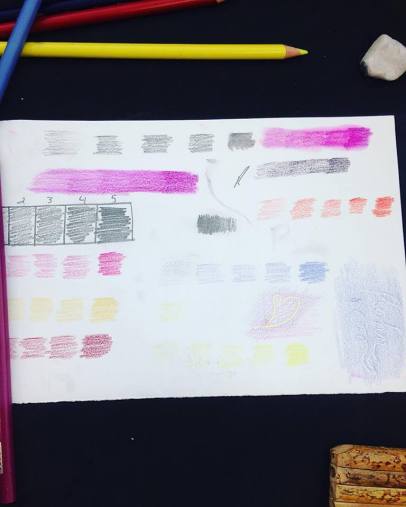 Once in awhile I grab a leaf and a stick of graphite to create a rubbing. The veins of leaves are particularly inspiring.

This is just one way that I keep inspiration at a constant in my life. I find that when the door is open inspiration comes and goes. Keeping a record or book or even a file on the computer allows me to always make sure that I have some shred of inspiration near me. Those times when I’m feeling slightly empty, I open my book and see all that I’ve been inspired by and it always…always…always…clicks something into gear and before I know it, I’m making.

How do you find (and keep) inspiration in your life and art?

One thought on “How to Gather Inspiration like a Pro”

There was an error retrieving images from Instagram. An attempt will be remade in a few minutes.

You may not sell my patterns or claim them as your own. You may make items to sell (i.e. on Etsy, at craft fairs) from my patterns but I ask that you link back to my blog and provide credit for the pattern. You are welcome to share my patterns on social media so long as you link back directly to my blog post (providing the link). No copy & paste of my patterns will be allowed under any circumstances.